A Rare Opportunity for Southern California on April 4, 2019

A Rare Opportunity for Southern California on April 4, 2019

For a decade, Women of Spirit and Faith has been following sacred streams of Divine Feminine wisdom in service of this Earth since the beginning of time. This ancient wisdom is an antidote to the toxicity of our times. We are honored to join with our sisters at The Museum of Women to bring renowned international performers Catherine Braslavsky and Joseph Rowe to Southern California. We first heard Catherine and Joseph in the south of France on a pilgrimage in search of Mary Magdalene and knew we were having a lived experience of healing feminine wisdom.

Coming to us direct from a six-week concert tour in Paris, they will perform their profoundly moving narrative concert weaving ancient texts with haunting global rhythms in service of balancing the Divine Feminine and Divine Masculine. 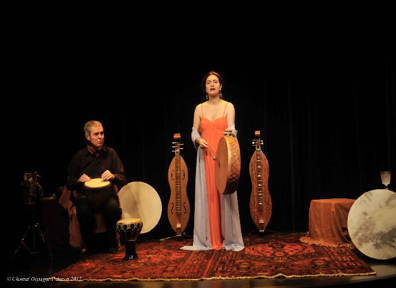 $20 per person
$30 per couple
Purchase tickets in advance at
http://events.constantcontact.com

Solomon (whom Muslims consider a prophet, though Jews do not) manifests a teaching which is profoundly akin to that of Jesus — together, they manifest the fullest flowering of this ancient current of wisdom. Perhaps the most remarkable trait that Solomon and Jesus had in common was their affirmation, not only of the absolute right of women to teach and conduct spiritual offices, but of the need to overcome the dogmas of patriarchy, and restore the balance between the feminine and masculine archetypes. A second, related theme is that of the unprecedented evolutionary crisis of today, one of whose primary roots is the patriarchal repression and denial of the sacred Feminine, reflected in our treatment of Nature, as well as of women. Both Jesus and Solomon were kindred revolutionaries, far ahead of their times in this respect.  The performance concludes with two compositions by the musicians, based on words from The Gospel of Mary Magdalene, and from the Gospel of Thomas.