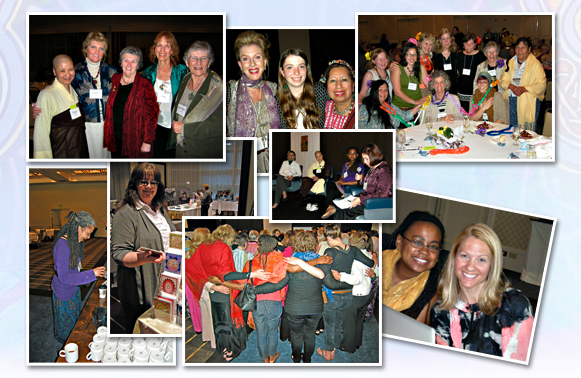 This large gathering attracted a community of 170 women from across the U.S. and Canada who came together for inspiration, deep wisdom and potent co-creation.

• Many opportunities for circle dialogues and structured conversations

• The Alchemy Marketplace which offered books, jewelry, art and music

• A Beautiful Meditation and Prayer Room for silence and reflection 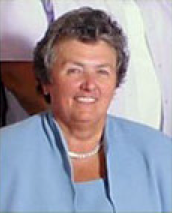 Voted “the most inspirational woman alive” in a recent survey!

A Benedictine Sister of Erie, Joan Chittister is a best-selling author and well- known international lecturer on topics of justice, peace, human rights, women’s issues, and contemporary spirituality in the Church and in society. She presently serves as the co-chair of the Global Peace Initiative of Women, a partner organization of the United Nations, facilitating a worldwide network of women peace builders, especially in the Middle East. Sister Joan’s most recent books include The Way We Were (Orbis) and Called to Question (Sheed & Ward), a First Place CPA 2005 award winner. She is founder and executive director of Benetvision, a resource for contemporary spirituality.

“At the crossroads in life, authority goes one direction: back. Authority goes in the direction that’s already in the book; the path that has been clearly trod before now, the way that is safe and sure, clear and certain, obedient and approved, applauded and rewarded. Leadership, on the other hand, rewrites the book. It takes the direction that leads only to the promise of a better tomorrow for everyone however difficult it may be to achieve it now. “The seed,” the Zen master teaches, “never sees the flower.”

The times are clear. The needs are now. The time for new decisions is upon us. Authority is not enough for times such as these. We need leaders now.”

Valarie Kaur is an award-winning filmmaker, public speaker, and writer who has advocated on behalf of communities swept up in hate crimes, racial profiling, and immigration policies since September 11, 2001. A third-generation Sikh American, Valarie has been called “a woman of extraordinary courage and vision,” an “inspiring millennial,” and “one of the most exceptional speakers/thinkers“ in the next generation of public intellectuals. She takes all as compliments that reflect a superb team of collaborators and thinkers in each of her projects. She wrote and produced Divided We Fall (2008), the first feature film on racism in the aftermath of September 11, 2001 and winner of more than a dozen international awards.

“It is time for young people everywhere to emerge from the shadows. We know how to form common ground with people different from us, whether Muslims or Evangelicals, conservatives or progressives. We can draw upon these experiences to help overcome the fear driving hateful expression on both sides of the debate…But only if we commit to action.”

Naomi “blends her passion for human dignity with humor and personal stories” informed by the challenges of growing up black and female in apartheid South Africa as the third child of Archbishop Desmond and Nomalizo Leah Tutu. Growing up the ‘daughter of …’ has offered Naomi Tutu many opportunities and challenges in her life. Most important of these has been the challenge to find her own place in the world. She has taken up the challenge and channeled the opportunities that she has been given to raise her voice as a champion for the dignity of all. 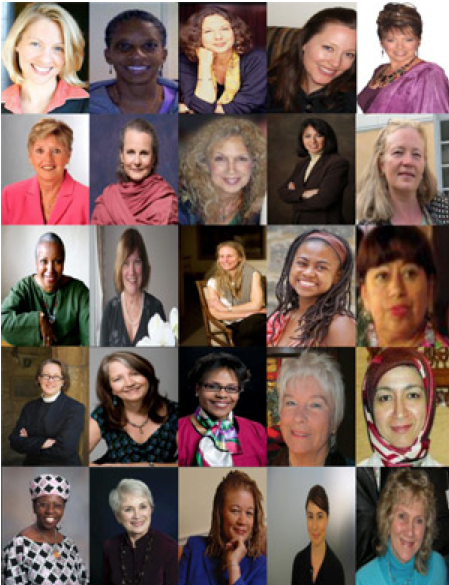 Z Budapest – Author of The Holy Book of Women’s Mysteries

China Galland – Author of The Bond Between Women and Love Cemetary

Musimbi Kanyoro – Director of the Population Program of the David and Lucile Packard Foundation.

Collaborative Leadership – The Wave of the Future
Kris Steinnes and Rev. Peggy Price

What is our Collaborative Opportunity NOW?
Networking Partners

Leading like Water: Bringing Forth Your Queen for the Benefit of All Life
Ava Park

The Compass of Joy
Anne Scott

Reclaiming Your Power as a Woman: 9 Arms of the Power Wheel
Hilary Hart

Shattering the Glass Ceiling: Tracking the Prowess and Progress of Women of Spirit and Faith
Ruth Sharone